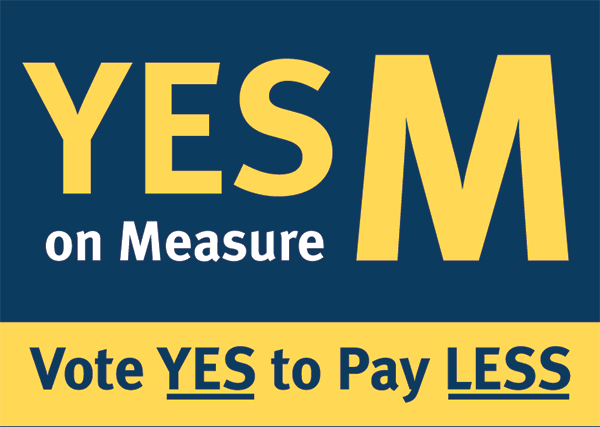 Last January, the Oxnard City Council voted for a massive sewer rate hike that would raise our household Utility Bills by an average of $326 a year – and later filed a lawsuit to prevent you from being able to vote on this.

Aaron Starr fought back in court and restored our right to vote down this increase. With the support of 61 volunteers, thousands of Oxnard residents rallied to the cause and joined Aaron Starr – signing his petition to place Measure M on the ballot to STOP the City’s unfair rate hike.

Here are just a few reasons to join us and Vote YES on Measure M.

Measure M will LOWER future utility bills to help Oxnard families and senior citizens make ends meet. Without Measure M, residents struggling on fixed incomes may be forced to choose between paying their utility bill and buying groceries or medicine.

Measure M will protect local JOBS. Without Measure M, many of Oxnard’s family owned businesses – including those employing hard-working farm workers – won’t be able to afford City Hall’s costly utility rate increase, and will need to lay off people.

Measure M will restore the PEOPLE’S VOICE at City Hall. City leaders refused to listen to our concerns and then tried to raise utility rates – without our consent. Measure M will hold them accountable.

Oxnard is a middle class community and most residents already pay our fair share for utilities.

The people of Oxnard deserve better financial management – not higher utility bills – to fix our community’s aging infrastructure. Other cities are improving their streets, sewers and water delivery systems without huge rate increases. Why can’t our leaders do the same?

Measure M does NOT stop the improvement of Oxnard’s sewer and wastewater treatment system.

Instead, Measure M will require our city leaders to come back with a more realistic and affordable plan to pay for these improvements.

2) Some city council members are saying that an 87% rate increase is needed to repair our city’s aging sewer system. Is this true?

No. Their claim is FALSE! Oxnard’s own Public Works Department recently issued a report in September of 2014 which stated that a 6% rate increase would provide enough revenues to pay for needed maintenance and repairs.

Unfortunately, city officials chose to squander over $4 million of city funds on an outside consultant who recommended an extravagant $675 million city spending plan which ballooned a 6% sewer rate increase into an 87% rate increase.

3) Doesn’t the city have a rate assistance program to help those who can’t afford an annual $ 326 increase in their utility bills?

The city’s so-called “rate assistance program” is a financial joke. The city has collected only $13,000 in donations for this program -- less than 50 CENTS per household.

That is enough money to offset rate increases for only 40 households.

The city would be able to provide assistance to only a small handful of people—leaving 99% of Oxnard residents stuck paying an average of $326 in higher utility bills.